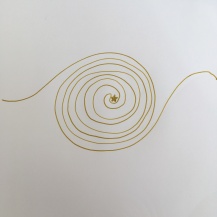 We prepare our souls to receive the light at Christmas during the festival of Advent, and we carry the Christmas light into the rest of the year through the festival of Epiphany. These two festivals, each four weeks long, hold the twelve days and nights of Christmas like two spirals–the one moving inward, the other spiraling back out and into the creation of the new year.

The three kings give us a picture of how we might enter the Christian year: not as marked by festivals like fixed stations which are always there, but as a journey we take each year that takes us into the new. The kings are not simply wandering, nor do they have a map which gives them a destination to head towards, but rather, they follow a Star–what at Epiphany we call the Star of Grace. It–unlike any other star in the heavens–moves before them, revealing the journey as they go. To follow it indicates that they have recognized the being behind that star. It is this being which speaks in their souls as something higher than any earthly king, before whom they bow down in highest reverence, offering their finest gifts of Gold, Frankincense and Myrrh. They recognize that even the highest on earth cannot offer what the Star of Grace brings to the earth.

King Herod presents another kind of kingship, an earth- and self-bound one. He is so consumed with his own power that he is unable to recognize anything higher than himself. He is unable to offer anything of himself and would rather murder innocent children than risk having his power undone.

A child who is feared by a powerful man and a star that moves both give us an opportunity to stretch our usual understanding of the world. The wise kings follow a star through which shines a bright new future for the true human spirit. The Star of Grace heralds the birth of this spirit who comes into the world as human spirits do: as a vulnerable child. At Christmas we can receive this great offering of the divine world, and through Epiphany, we can learn to orient ourselves anew, as ones who offer ourselves in devotion to the becoming one.

Liza Joy Marcato is a priest in The Christian Community, Movement for Religious Renewal